Skip to primary navigation Skip to content Skip to footer

In the early 1980s, Memphis was preparing to open the MUD ISLAND RIVER Park and Memphis Riverboats was to have a role in the new adventure. The idea of the Island Queen was born. In 1983, “Capt. Tom” competed the Island Queen, a 100-ft. long vessel with an enclosed first, deck a covered second deck, and a partially covered third deck.

Her great outside vistas makes her a perfect vessel for sightseeing and day trips on the Mississippi river. The Island Queen has since been the preferred vessel for untold numbers sightseeing trips, dinner cruises, and private charters for all types of groups. Her main deck consist of seating around the sides, two rows of inner seating, and open center dance section. At the bow of the vessel is a slightly raised stage perfect for small bands or DJ. During the summer cruise season, the Island Queen may make two sightseeing trips at 2:30 p.m. and 5 p.m. and one or two late charters. She has been a workhorse in the fleet and delighted passengers every cruising day. 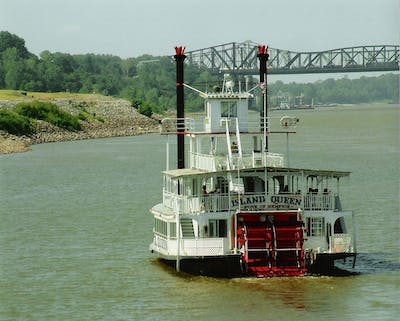 Built in Iowa at the Dubuque Boat and Boiler Works, she is the first in a long series of vessels easily recognizable by the classic “Dubuque” lines. The Memphis Queen II cruises the downtown Memphis Harbor primarily for the private charters. She offers an affordable way to host friends, business associates, or civic organizations, for most any occasion. Over the years she has proven to be a poplar boat due both to her nostalgic and historic 50s design.

The Memphis Queen II was posted to the National Register of Historic Places on July 5, 2006. Her Reference Number is: 06000550

Currently undergoing complete renovation to meet current U.S. Coast Guard Requirements, the Memphis Queen II is not available for booking at this time. 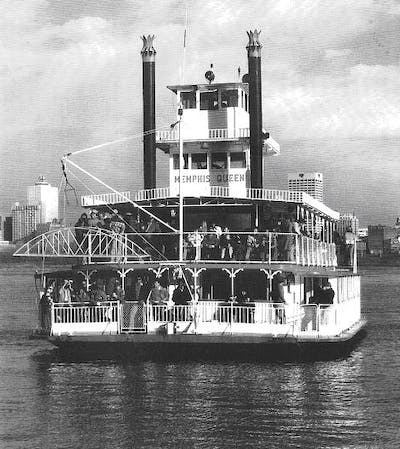 The Memphis Showboat has two fully-enclosed decks. The main floor has a huge dance or dining hall featuring large raised stage for big bands. The second deck veranda surrounds the first deck with ample seating and views of the stage and dance floor. Brass and glass chandeliers hang high above the man deck, providing ballroom elegance, she also features a river and harbor view mural behind the stage with paintings of vessels in our fleet. The interior is decorated with grand Victorian charm including hand-painted wrought iron “gingerbread.” Her third deck is completely open a “hurricane deck.” This is one of the most popular locations on the boat during special events.

Currently undergoing a complete renovation to meet current U.S. Coast Guard Requirements, the Memphis Showboat is not available for booking at this time. 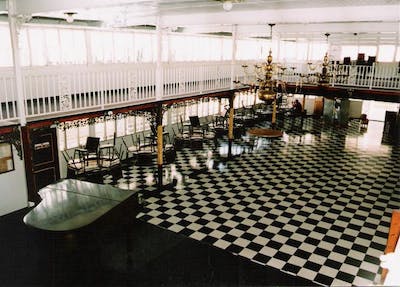 A custom-designed 11-passenger thrill ride created for Memphis Riverboats. The Captain is powered by a Chevy Marine LS-3 383ci big-block engine and driven by a Hamilton JetDrive.

The Captain is currently not in use. 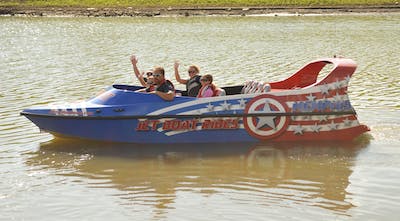 The “Queen III” is decorated inside and out in the classic Victorian Riverboat style. She is heavy on the charm with “gingerbread” on every suitable surface. Twinkling carriage lights, elegant drapes, and classic flowered carpeting in the main salon. The raised and carpeted stage on the “QUEEN III” is located in the stern of the main salon with a river view at the stern and on both sides.

Hundreds of bridal parties have used the main salon for church-style seating for their wedding and, after a quick resetting of the main deck, their reception has continued immediately after in the same spaces. The first deck Paddle Wheel Lounge serves as the perfect bridal dressing room. 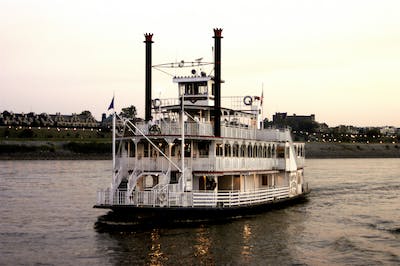 Our airboat will put you closer to the river than you’ve ever dared to go before. From jumping waves to doing donuts off of sandbars! A trip on our Demona gives you a unique and thrilling view of the Mississippi that will be a highlight of your trip to Memphis.

The Demona is currently not in use.